Slovakia- mountains, grandeur, meadows full of wild flowers, lands, castles, caves these are the treasures of Slovakia. We bring you only these pictures that you can see the beauties of Slovakia. Make your list of places for your visit of Slovakia !

n old castle from the 16-th century. In 1792-1795 his successors rebuilt the manor house in the Classicistic style. 700 000 m2 large park with exotic trees and bushes, numerous Classicistic and Romantic buildings arose around the manor house. A forest surrounds the park.
The manor house lost its Classicistic design after it was rebuilt in 1880. It started to be used by hunters and nobles. Nowadays, in the manor house there is a museum of historical flat culture, furniture from the 15-17-th century, classicistic and empire equipment. You can find there collections of paintings, portraits, a book-case with more than 20 000 books, gun collections and hunter`s trophies, exotic souvenirs from all around the world esp. from Asia and Africa.

The castle is known for its attractions, including the popular Castle Fairytale, the International Festival of Ghosts and Spirits 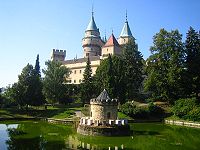 and the Summer Music Festival. The romantic castle is also a popular location for filming fairy tale movies, such as Fantaghirò. In 2006, the castle attracted about 200,000 visitors. It hosts the single most popular museum in Slovakia and has featured in many movies.

he Little Carpathians directly above the Danube river in the middle of Bratislava. Because of its size and location, it has been a dominant feature of the city for centuries.

The location provides excellent views of Bratislava, Austria and, in clear weather, parts of Hungary. Many legends are connected with the history of the castle.

Zvolen Castel was built in the 14th century. It served as a hunting lodge for King Louis the Great of Anjou and 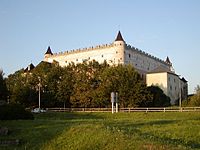 later had lot of owners such as Matthias Corvinus. Today the castle boasts a gallery of early European masters and byzantine icons.

The castle sits atop the rocky hill that creates a unique mediaeval atmosphere. The first reference to

Laugaricio – Trenčín´s original name was the writing on the rock below the castle. The castle underwent its biggest develepment during the reign of Matúš Čák of Trenčín- known also as Lord of the river Vah and the Tatra Mountains. 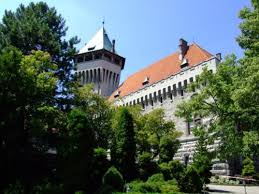 Smolenice Castle was built in the 15th century, but it was destroyed during Rákóczi’s War of Independence and Napoleanic wars. In 1777, Count János Pálffy from Pezinok inherited Smolenice but did not reside in the castle due to its poor condition and lack of money for rebuilding it. The castle was only rebuilt in the 20th century, by order of Count József Pálffy. The architect Jozef Hubert designed the new castle by using Kreuzenstein castle near Vienna as a model, and the works were controlled by the architect Pavol Reiter from Bavaria. During its construction there were masters from Italy, Germany, Austria and Hungary, and 60 workmen from Smolenice and nearby villages. The main building has two wings and a tower, and is made of ferroconcrete.

The castle was damaged in the spring of 1945 during World War II, and in that same year the state became the owner of it. Some reconstructions have been made after 1950, and since June 26, 1953 the castle is property of the Slovak Academy of Sciences. The castle serves now as a conference centre, and it is only opened to the public in the months of July and August.

Orava Castle stands on the site of an old wooden fortification, built after the Mongol invasion of Hungary of 1241. 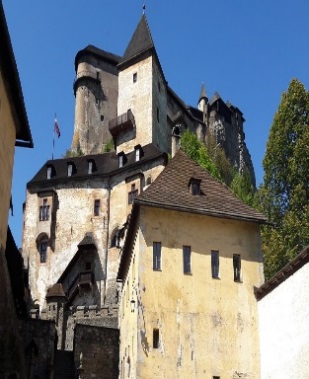 The mining magnate Thurzo family, who took charge in the mid 16th century, were responsible for a great deal of rebuilding work, although its present form was not finalised until 1611. It burned down again in 1800, after which it was no longer used as a residence. And then, after a period of dilapidation and World War II, the castle became a national monument.

f the castle´s attractions is a lime tree whose huge trunk measure 7,5 metres around. The tree was names after Matthias Corvinus who used to sit under it.